It was late march 2013 around midnight, Kyle, Lucy and Richard Hendry had just spent 3 days at a local country music festival. Tried and covered in dust, they made their way home. IN the car Lucy mentioned how great it was that so many people in Brevard came to the event.

Richard thought out loud : I wonder what other type of music event the area would support?” and without missing a beat Lucy replied

Kyle shot his father a look that told Richard that they would be up all night. After Lucy went to bed, Kyle and his father stayed up for hours, researching bands, buying the domain and on sunrise the next day – 80s in the park was born. Most people credit Kyle and Richard with brainstorm but they are the first to tell that really – Lucy was one! Now, they also offer that maybe if she had known what would happen next, she might have kept silent because its been a long, long ride.

The event started in the Hendry’s kitchen that night in 2013 as 2 days with a couple of 80s bands, by September that year – just 6 months later – it had become a 20 band,3 stage event with actors from 80s films, TV, celebrity look a likes, a horror film festival and the biggest 80s event on this side of the world. Covered by 25 media outlets and drawing ticket holders from as far as Melbourne Australia and 3 other countries.

Each year since, 80s in the park, like the decade it represents – has be all about change. In 2014, they added an extra day and began the best VIP after party that ticket holders have ever seen, in 2015 they added yet another day and a spotlight on new artist stage and in 2016, they had more parties and special events then every before. 80s in the park has now evolved into a up close and personnel event experience like none other in world. At no other 80s festival can ticket holders mingle and drink with headlining band members, swim in the pool with them and enjoy the music from the decade that made us so close as at 80s in the park.

This year the 2017 event had taken another leap forward with the addition of the first ever – ROCK CONVENTION, featuring special guest Dan Spitz;founding member of Anthrax, Simon Wright; legendary Drummer of AC/DC and DIO, Rachel Bolan of Skid Row, Jack Starr of Burning Starr, Video Vixens Bobbie Brown and Brandi Bandt and many more while bring to the main stage a few of the biggest bands they’ve had including JACKYL , LYNCH MOB, HOUSE OF LORDS, ENUFF ZNUFF, TED POLEY OF DANGER DANGER, RANDY JACKSON OF ZEBRA, LILLIAN AXE, EVERY MOTHERS NIGHTMARE, JETBOY, JUNKYARD, PHIL LEWIS OF THE LA GUNS, GENE LOVE JEZEBEL, NOVA REX AND MANY MORE. And this year they have convinced Greg Billings to get Tampa’s Favorite home town 80s band back together – STRANGER!. Plus 4 VIP after parties, a free Victory Casino Cruise on Friday with special band on board and more.All to make their 5 year show the very best 80s event anywhere. 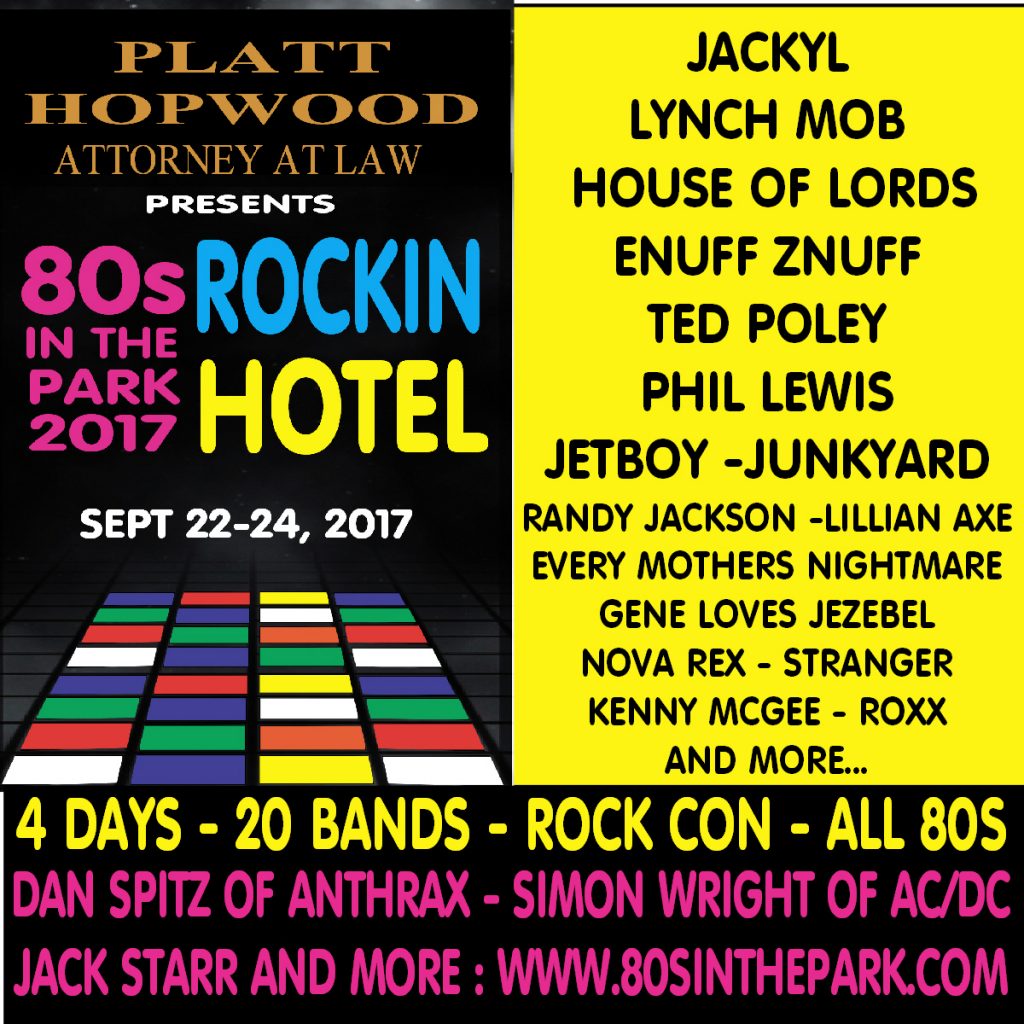