“I don’t talk to Christians, especially those who tow their bikes from Florida.”

It’s the time of year that everyone is planning their trip to Sturgis, so I thought I would share our 2001 trip. We left Orlando and headed first to North Carolina for a rally. After enjoying the Smokey mountains a few days we headed west. We stopped to see Sharon’s grandma in Indiana and met some friends to ride with. We rode around 450 miles a day for a few then the last day we did 780 miles. My bike purred all the way there and back. Our friend Becky’s cousin let us stay at her place in a camper that she had. Our friends had other plans so Sharon and I rode the Black Hills area for a few days.

One day it was so hot that the tar was melting on the roads. We watched a chick on a Sportster go sliding. It was crazy hot! We ended up out at this old western bar, Moonshine Gulch. This old biker said “ I don’t talk to Christians, especially those who tow their bikes from Florida.” I said “Well I rode mine.” He said ‘Oh I’ll talk to you then.” He was a hoot. He said do you want to take a short cut or go back on that melted road. The road he sent us down was a gravel road but some of the best views we saw out there. That was what made the trip special, we met so many cool people.

We left in 107* temperature, riding thru the Badlands and down thru Broken Arrow. Made it to Nebraska with the sun going down and the temperature dropping fast. Woke up to 40*. We headed to Colorado and rode the Rocky Mountains. Got lost and saw Breckenridge area. That day it rained most of the day and we followed a rainbow for most of the day. It was an awesome experience. We stopped in Missouri and visited Sharon’s Brother and headed home. We were gone 25 days and saw 25 states. 6850 miles. If you haven’t taken that trip, plan on it. God’s made this beautiful country for us to enjoy.

In His Wind , Rev Al 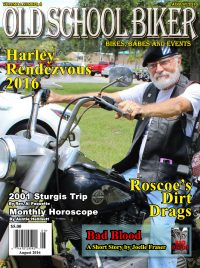