“I gotta say, Ol’ Man Weather was good to us this year…just a bit on the cooler side, BUT nice!!”

We rolled into Roscoe’s Chili Challenge on Thursday, Nov. 3, 2016 at 10:15 AM, set up  our digs for the week-end, and prowled around. Looking for photo opps…pretty quiet on Thursday!!!  Food vendors were all set to go, however…quite a variety too!

Friday was a noticeable increase in people, and the camping area began to fill up towards evening…the music started too…!! I hooked up with Don Rogers from EASYRIDERS Magazine…it was his first time there…he did his usual bang-up job!!

Friday night was the annual tribute to our vets, with a display of all the service flags. Later, MC, Pogo did his best to talk several cuties out of as much clothing as possible…it worked!!

Saturday, of course, was the BIG day. Horse shoe matches, and very early…the start of the chili cooking!! Biker games, and the ever popular Outhouse Nationals, followed by the best part….eating all that chili.

One little group was kept very busy all week-end, and those were the body painters…the girls really went for that…a few guys too, believe it or not!!

After all the competition had ended, trophies and prize money was awarded, and, the bands started playing, non-stop, into the wee hours. Next came the official welcoming ceremony, service flags, Taps, and the National Anthem…during which…EVERYBODY stood..!! Very emotional ceremony. Later, came the Pole Dancing finals, and of course, the “Beauty Contest”…!!

I gotta thank Roscoe, David, Liz, Pogo, Geoff White,  Honor Bound M.M., and all who made the week-end a fun-filled event. Big expansion to the chili barn too, and, a new bar…Neat!!! The clean-up crew too, did a fabulous job of keeping the grounds in tip top shape…security did their job well too. Be the BIG MAN willing, I hope to see you all there next year…it was a blast!!! 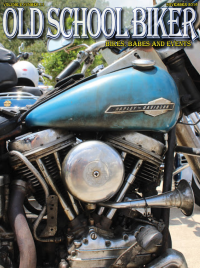