I had just moved here and was hanging with a few of my Dads friends. … So I ended up going to a party with them at a motorcycle shop in Melbourne, Florida.  THAT’S where I met Billy Lane for the first time. I had no idea who he was or what he did, to me he was just another young guy with a shop.  Well, come to find out after talking to him and looking at the bikes he built I was amazed at the uniqueness of his work. I knew then he would make it in this crazy biker world. He treated me with respect and was very patient with my (then) lack of knowledge of motorcycles.  We have seen him numerous times over the years since then. We Love Billy and his talent for building some of the most awesome machines I’ve ever seen… I will always, NO MATTER WHAT, have respect for what he does and what he’s faced in life. It’s not always how we want it to be but if you deal with the cards the way they fall we ALL can make it through this crazy life.

The photos that were chosen for this article are from different events my father Miserable George Guignet attended, and a couple GREAT parties!

THIS is the Billy WE know!
Valgal 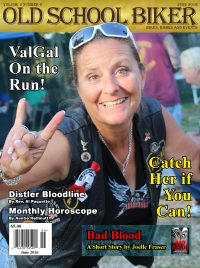