Ever since I saw the first Sons of Speed Race, I been chompin’ at the bit for the next one, and this past Oct. 21, 2017, out at NSB Speedway…it happened!!!

We got there early, went over to the pit area, and were amazed at the array of old school Board-track racing machines…a few, almost 100  years old..!!! I noticed Harley’s and Indians, if there were other makes…well, I missed them.

It was an absolute joy to watch the warm-ups and tuning of these legendary machines!! Some of the riders even wore suits that made them look like they just stepped out of the past!! Billy Lane himself, wore an old-time leather helmet!!

These bikes have no clutch, no tranny, and, NO BRAKES!! Put ‘em up on a stand, and yank on the rear wheel, and mostly, they will sputter to life; or get a push, or coast down from the edge of the high bank on turn-4!!!

They call it “Sons of Speed”, BUT, there are several “Daughters” of Speed running as well, including Shelly Rossmeyer, and Roxie….(just Roxie, was all I got!!), and last races’ winner, Brittney Olsen. She was ready to ride, but, her bike wasn’t completed as yet, but, she didn’t exactly “sit” it out…she was running all over the grounds, sporting a cute little cheerleader type outfit. Roxie was a rookie, but finished 2nd. in a heat, and was giving Billy Lane a run for his money!!

A rider named Jake, #13 , was the eventual winner for the day. He received a beautiful hand tooled trophy.

We had the pleasure of meeting Roxie, along with Rick Petko from Orange Co. Choppers, plus MC Bubba Blackwell!!

All in all, it was a fantastic day!

I wanna thank Billy Lane for his hospitality, and NSB Speedway for a fine facility. Looking forward to Bike Week, 2018 for the next Sons of Speed event!!! Stay tuned…. 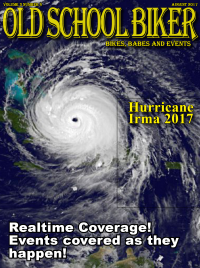