Saturday, August 12, was another blistering HOT day here in sunny Florida, AND, it happened to be the 16th. year for the Melbourne Mob!!!

The live band…”Adawak”, was jammin’ all day long…a fabulous spread of food was all laid out, pretty girls were tending bar(s) AND washing bikes!! Fantastic job: Jen, Alexa, Kate, Connie, and, Junior!!!

We met a bunch of Bros and Sisters that we hadn’t seen for quite a spell….that’s always nice!!

Oh yeah…let’s not forget the DUNK TANK. It started out with Connie as the “victim”, and pretty soon, Big John took her place for a chance to get dunked in that nice cool water!!

As always, The Mob had several canopies there to provide shade from the hot sun.

Also, awards of recognition were handed out to deserving folks, with Jen getting the “Eye Candy” Award!! She kept the cold ones coming inside!!!

All in all, despite the heat and threat of rain, it was a GOOOD day. We wanna thank the MOB for their hospitality…they ALWAYS treat us good!!! Here’s to another 16 years…maybe MORE!!! Ride safe… 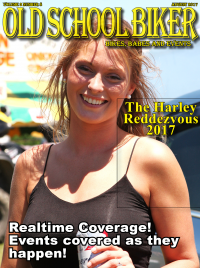