We were lucky on Aug. 8th., 2020, we didn’t get the usual afternoon showers, and this prompted a large crowd to congregate at the MOB in Melbourne, Fl. for their 19th. Anniversary Celebration. Yes, they had a terrific  band, ”Occasional Astronauts”. As usual, the food was fantastic, and lots of it, with Sandra’s very tasty chicken & dumplin’s…of course, I ate too much!!! I hadn’t been out and about for awhile, so it was nice to bump into old friends again. Yes, as advertised, there WAS a wet T-shirt contest…well, not exactly, it was more like a quick flash, but, they were all winners. First place lady got a big bottle of hooch. Ended up with 10 contestants …I was surprised!!! All in all…a damn good party!! Hey, thank a vet today, support your local MC club, and GOD BLESS AMERICA…!!! 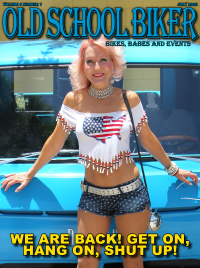