It was pretty plain from the beginning of the day, July 8, 2017, that Ol’ Mother Nature was NOT going to cooperate with the North Brevard Warlocks, and their two-year celebration party at the clubhouse on Lemon Ave. in Titusville. Dark clouds and thunder rolled, and, lightning flashed off and on for the entire day…things looked pretty grim.

However…motorcycles started to trickle in 2 or 3 at a time, then, entire chapters arrived!! Folks, this continued for most of the day, and soon, Lemon Ave. became a parking area for a huge number of bikes!! This party was now in full swing!!!

Barmaids, Cindy and Jen were busy all day, extra beer runs were necessary in order to wash down the tons of fabulous food available: dogs, burgers, chicken, salad, sandwiches, cake, cookies, and, other goodies…!! There were canopies set up throughout the area, to keep the rain off, including chairs and tables…(biker styles)…an outside refreshment station as well.

Later in the afternoon, a band arrived…(no name…!!), but, they were delayed by…you guessed it…RAIN…!! I was told later, that they finally DID get to play.

I gotta thank Chapter Boss, ZigZag, and V.P. & enforcer Stryker for their cooperation, as well as all the other Brothers. They even put ValGal to work hawking 50/50’s…!!! The party was a tremendous success, despite the nagging weather.

Stay tuned for news of their next event…maybe the weather will be nicer…!!! 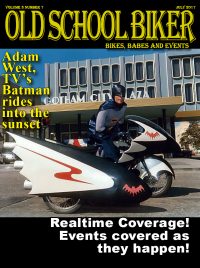