I can understand the light attendance of motorcycles at this year’s annual Indian River Rumble. Even though some of my friends did ride up, they came up after the morning showers. Most of the car guys have bikes and vice versa, but it was pouring when I walked out my door and half of the drive up. That was the bad news.  Those who might have stayed home missed a hell of a gathering, and it didn’t seem like many missed it.

The Derelicts CC’s fourth Rumble really came into its own this year.  Yes, there was live music, pin up girls and a wealth of machine candy, but it was the crowd that was alive and the reason this was a party. IRR filled the vacuum from us missing the October Vintage Kulture show that was cancelled,  and with Choppertime at Willie’s during Biketober having its last show (Bike Week only from now on, Willie says) IRR 5 will surely give us another chance to gather and support a charity, this year being Heroes on the Water-Space Coast Chapter, which received more than $1,000 from the show. The Titusville American Legion Post 1 spot is about as perfect as it gets: two bars, plenty of parking, lots of shade and a large sunny field so you can really drool over the cars.

Unlike Daytona, there were no cops running your VIN numbers or ready to write tickets. Just like Brevard in general, it ran smoothly and under the radar.  The high point for me was introducing a friend with a BSA to another friend who works on British bikes (God bless him) then finding the same mechanic several top-notch painters for some work he needed done. Meeting new people or putting a voice to FB friends was also a humanizing thing. Hardly anyone was scrolling through a damn smartphone unless they were checking pics of friends or cars they had just taken. CC shows almost always welcome bikes too — no, not your friend’s big-wheeled bagger, in fact, STOP THAT SHIT! — and the next CC show is Gasket Goons’ Hot Rod Hootenanny at the No Name Saloon on Feb. 27.

“We had a record crowd this year,” said Elvis Gringo, “well over 600 people.  We expect the event to continue in size because folks come out and have a blast.  And the fact that they can have a great time and do it for free is why people will continue to support the Rumble.”

As far as being a vendor, my suggestion is to make friends with a club member.  “We usually have charity groups that sell things.  By limiting/eliminating vendors, they don’t have any competition, ya know?” Elvis explained.  “Not to mention helping out a local charity group.  That’s as good as it gets: have fun while helping a local Brevard County group.”

Many great people had a part in making this a stand-out show this year, and Derelicts CC should be applauded and given the credit they deserve. Simply an outstanding event that can easily grow more and outshine Billetproof or other destination shows. DFFD support your local clubs. 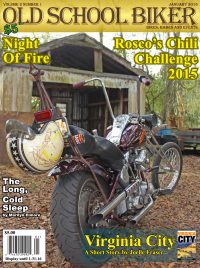