Anyone who ever attended a Motorcycle Club event kinda expects something….well….topless…right??? Well, at the Unchained Kings event on Oct. 23, 2021, there were NO topless occurrences of any kind!!! The whole event was set up as a sort of circus theme, with different acts taking place as the evening progressed…the main act on stage was Indigo Foxxx…a guy and gal combo who performed a host of interesting little capers, including card tricks, hypnotism, piercing, fire applications, escape artistry, and tricks on a bed of nails…all things that you would not expect at a MC Party…! There were also the Brisngr Fire Dancers, performing in memory of a fallen comrade, along with a moment of silence. Along with all this, there were the JessPaints321 Body Painters. I will admit that there were many ladies prancing around with “interesting” costumes, plus a contest for the best appearing “ghoul” , BUT…no skin…definitely a “new twist” on MC party entertainment, BUT, very enjoyable. There was a bunch of very tasty food, and of course…lots of “cold stuff”. It was fun to watch the girls get “strung up” on stage too. I had a blast, and I’d like to thank the Unchained Kings for their hospitality…a good bunch of people!! Pop in there sometime on a Wednesday evening. 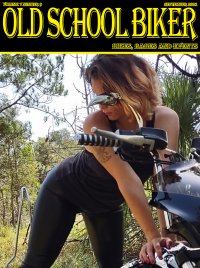