The Space Coast HD All-stars Band was playing, and did draw quite a few dancers…even in the heat!

Inside the spacious pavilion, there were fans to cool it a bit, and lots of tables, plus the bar and…FOOD!!! Outside, 2 lovely bike washers were hard at work, as was the gorgeous Alexsis, PR Lady for Miracle City HD, informing everyone of the brand new dealership in Titusville…!!

There were door prizes, an auction, and of course…the 50/50…!  All in all, a very pleasant way to wile away a few hours on a beautiful Spring day in the Sunshine State..!!

Folks, support your Vets, stand up for your country, and ride safe…see ya next time…OK?

Well, Sat. ,April 6th. was a busy day for this old boy…we covered the Law Ride, and right after that, we boogied down to Melbourne to check out an event that the MOB had organized to “Save the Clubhouse”. Not sure what THAT means, but, there was a nice crowd there to participate. Live music…(never got the name of the band), food, drink…the works. Oh yeah, lots of gorgeous ladies too.

There will be another event coming up soon, with Biker Games….watch for that one…always exciting!

Oh, by the way, Sandra promised me Chicken ‘N Dumplings at the next event…!! Beautiful weather this time out too…hope it sticks around for awhile.

I thank the MOB for their hospitality.

Hey, thank a Vet, stand up for your country, and, we’ll see ya next time… 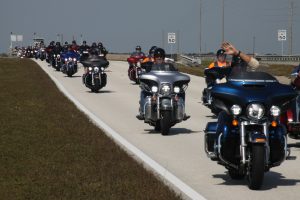 I really don’t know what we can show you here that hasn’t already been posted somewhere else, BUT, we’ll try. Tanner Jam-2019 was a rousing success…biggest crowd ever for this, #6 event. As of this writing, over $13K has been collected, with funds still coming in…! Just goes to show you what people can do when money is needed to fight a disease like cystic fibrosis…! There were 5 or 6 bands playing all day and night, there were games, auctions, poker run, 50/50, a lemonade stand, food, drink, babes, and, massive amounts of Brotherhood. Tanner himself really enjoyed the ride in Wild Bill’s 1950 Buick. Hey, I would have liked a ride too…ya well, maybe next time…!!! The parking lot was overflowing with motorcycles, carefully parked there by a beautiful attendant, while 4-wheelers jammed up the frontal area of H&D Roadhouse.  Also, some lucky person won a CRUISE!!! Folks, it was a fabulous day all around, with perfect weather.God Bless all the MANY people who put this event together, and my thanks to all the gorgeous ladies who posed for our lens. Ride safe…thank a vet, and, stand up for your country…

A little friend of mine, Missy, was working as one, at the Black Sheep Pub, up on A1A, for Superior Detailing, who was kind enough to allow us to shoot a few pics of the girls doing their thing!! I checked out some of their work….very good!!!

Thanks ladies, for brightening up my tiring day…!! Grabbed a meal at the Pub while I was there…excellent !!!

Hope everybody had a nice Bike Week….

Ya know, I’m not even sure just how many years the fabulous Willie’s Tropical Tattoo Chopper Show has been going on during Bike Week and Biketoberfest, but,

it gets bigger and better every year!!

Plenty of parking space, food and drink vendors, babes, and of course, some of the craziest hand made choppers you’ll ever come across.

Roadside Marty kept the ball rolling all day as only HE can. Ace builder, Dave Perewitz was there too, plus, I did run into a top female racer, Brittney Olsen, in her signature red skirt and golden slippers!!!  Big Rick and the Troublemakers were wailing out back…good show, Rick.

The group of Veterans was back to enjoy the show…God bless ‘em. I had company with me this year…Tonya…one of our cover girls. It was her first trip to Bike Week, and, she loved it!! I think the pictures can tell the story a lot better than I can, so…enjoy…!!!

Wednesday at Bike Week is always our day to visit

and now…it looks like yet another tradition has been born…

just across the road…Cacklebery Campground.

Both venues were jammed to the hilt with revelers from all over the world-literally- a sea of eager bikers, out to cram all the fun they could into their beings, in as short a time as possible…(it seemed)!! But hell, that’s Bike Week!!

With Cole Slaw Wrestling, the Budweiser Clydsdales, the gorgeous “beer girls”, food of every conceivable type, plus vendors selling just about anything you could imagine, and a campgrounds near-by…I mean, this was IT!!!

Folks, this is a corner of Bike Week you wanna get acquainted with ASAP!! Go to SR 415 & Pioneer Trail in Samsula…easy to find…that’s where it’s happening!!!

Maybe we’ll see ya there next time…

The Bike Week gathering at WMC, Lockhart, is usually a fun time, however,

this year, it was a somber day of remembering…

remembering that is, of five Brothers who had passed on to the Freebird Chapter.

Among them was Grub Freeland, founding father of the Warlocks Motorcycle Club. Grub was a Navy Vet who served on the Aircraft Carrier, U.S.S. Shangri-La, as well as duty in Vietnam. He, truly, will never be forgotten.

It was a huge crowd who came to remember the Brothers who had passed, and, during the service, a toast was drunk to honor them all. The fire was lit, and during the burning, as in most burnings, certain figures emerged from the flames…I wonder if anyone else saw them, as I did…?

Thanks to all who made this day one that we’ll always remember. GRUB, and all the Freebird Bros…Rest in Peace… 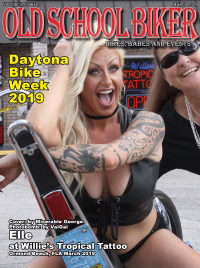