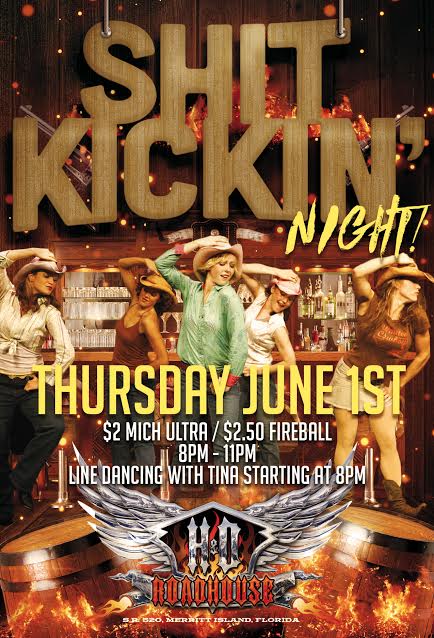 OK, Thursday, June 1st. was not a very stable day, weather-wise…We DID get our much needed showers, and we thank GOD for that. I believe the weather conditions DID NOT curtail attendance at the first Shit Kickin’ event at H&D Roadhouse and the crowd that DID come out had a ball.

There was a line dance coach there, the lovely Tina, and she did her best to get things moving.  Good music…just not always LINE DANCE music. But, I’m thinkin’ all issues will be resolved in time for the next session.

Look for our new flyer for the next Shit Kickin’ Thursday. Make it a point to come on out to H&D Roadhouse on SR 520 in Merritt Island, and give this fun way of dancing a shot…OK? We’ll be lookin’ fer ya….

Well, March is on its way out…not exactly like a LION, but, April is on its way, and of course, the last Thursday signals the time for yet another 70’s Night at H&D Roadhouse, on Merritt Island, Fl.

Ace DJ, Jason was the headliner, spinning the tunes from our  favorite era…THE 70’s….of course!!

Cash prizes were given out for car and bike winners, and if you were hungry, there were chili-cheese dogs, along with just about anything you could think of to wash them down…!

Folks, it’s ALWAYS a fun night at the ROADHOUSE!!! Make it a point to venture out there in April. Watch for a heads-up flyer, and of course, OldSchoolBikerMagazine.com will be there…!!!

Feb. 23, 2017, saw a big break in the cold weather, bringing out a bunch of riders to the well received 70’s Night at H&D Roadhouse on Merritt Island, Florida. D.J.Jason was back at the console…spinning all the favorite tunes from way back when.

Don’t forget…the last Thursday of the month…head out to the Roadhouse…Harry and Deb, and the gang are waiting for you…Hey…ride safe…

ValGal and I got there just before 8PM, and the parking lot was empty, but, by 9PM, you could barely squeeze in another bike!!! Yes folks, yet ANOTHER packed house at H&D…!!!

DJ Jason was revving ‘em up with all the hot tunes from way back when. The one that sticks in my mind is “YMCA”…remember…??

It was non-stop entertainment, all evening long. The dance-floor got a good pounding…THAT’S for sure!!

Man, you don’t wanna miss the next 70’s Night gathering…the last Thursday in February…8 to 11PM, at H&D Roadhouse on SR 520, Merritt Island, FL. Right across from the Lincoln Dealer…ya can’t miss it. Put on yer dancing shoes, and join us…OK? Harry and Deb say…THANKS…!!!

A front moving in, some rain, and a blast of cold air, couldn’t keep the die-hard “BOPPERS” away from the final HOP of 2016. It was a kinda “late night crowd”…but, they were pretty lively out there, doing the TWIST for a nice prize. Thanks Harry and Deb, and all their wonderful staff, for a fantastic 2016…you guys ROCK…!!!

Braving threatening skies, a very active crowd of 60’s music enthusiasts made their way to H&D Roadhouse, this last Thursday of the month, to participate in SOCK HOP #2. DJ, Jason played some fabulous tunes, which kinda had just about everybody skipping around the place, instead of normal walking…I kid you not, it was amazing, the effect that music has on people who did their thing during that fabulous era…even had ME bouncing around a bit!!! Trophies were awarded for 60’s dress mode, hula hoop performance, and of course…the Twist..! As Harry said….”Do it like ya did last summer…” The next Sock Hop is planned for Thursday Dec 1st…so come on out and work off that big meal…OK…see ya then…

Despite thunder and lightning skirting the area, OSB Magazine and H&D Roadhouse drew a pretty fair crowd for their first monthly Sock Hop!!

Old school dancers and hula hoopers whooped it up to the strains of 50’s tunes provided by  WRN23 Internet Radio, featuring Charlie V and his wife Laura, who also provided T-shirts to the winners of the various classes, as well as bar tabs from H&D.

Folks, I heard tunes I hadn’t heard for at least 30 years…brought back a lot of pleasant memories,

for sure!! The Sock Hop will be a regular happening at H&D, every last Thursday of the month, so, mark your calendars, break out your saddle shoes, and join us for a night of ol’ school fun!! H&D Roadhouse, SR 520, in Merritt Island, FL… 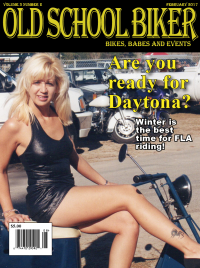