Back around 1997, WMC Brother, Chuckles, came up with an idea to make a stretch behind bars, maybe just a bit easier, by establishing the Prisoner Benefit Run. It was designed to raise funds which would be used to purchase much needed items which are used by inmates…items that we largely take for granted…toilet articles, certain articles of clothing, etc. Certain portions of these funds, could also be used for attorney fees, etc. The event became very successful, and has become an annual happening every April; this year, attracting a very large crowd to the Cocoa CH on SR 520. There was food, and drink…AND pretty girls, plus a large amount of BROTHERHOOD…very successful event all around, and, I was proud to have been invited…thank you, Brothers!!

Hey, ride safe…see ya next time… 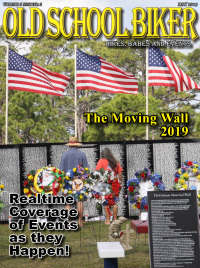