Several weeks ago, we lost a good friend…not only to me, but to almost everyone in our area. Glenn “Pappy” Edmondson lost his longtime battle with kidney failure and heart problems. He fought a valiant battle, but, GOD finally called him home…he was just 62 years of age, and a Vietnam Vet.

After every one of his frequent hospital visits, he was back on the road, ASAP…on his bike!!! The man had an iron will..!

On August 19, his many friends took him on his last ride, which ended at Lou’s Filling Station in Melbourne, amid a huge crowd,

there to not only pay last respects, but to remember all the good times too!! Lots of good food and drink, along with Tony Karaoke as well as many nice door prizes. AND, talk about pretty girls….well, they were all over the place!!!

I’m certain that Pappy was smiling down on Lou’s all day long…we could almost feel it!!!! He was quite a man!! We’re gonna miss ya Pappy…ride free on that Golden Highway, and may GOD rest your soul… 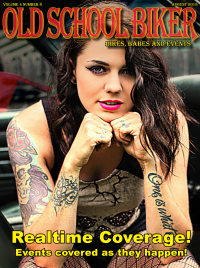