There’ll probably be a difference of opinion as to which(who) is more beautiful…Chloe, or the motorcycles she’s posing with.

The 3-Wheeler is all American made, as is-of course-the one of a kind Panhead chopper.

All this took place at H&D Roadhouses’ anniversary party, which included the anniversary of Old School Biker Magazine. Fun day all around… 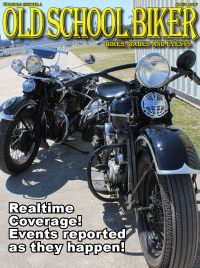